Overview. Informed by biological examples, we will first fabricate similar structures as surrogates to investigate the functionality of evolved structures discovered in Thrust 1. Based on these studies, we will develop new theory and models (both analytical and numerical) to design structures with optimized functions. Guided by theory and models, we will fabricate 2D, 3D and hierarchical structures across scales (250 nm to millimeter) from polymers, metals, ceramics, renewable materials from natural resources, and their nanocomposites with the aim to harness or manipulate water, surface effects, and light, and to manage heat and load transport for energy efficiency. We will vary the materials surface and optical properties, thermal and electrical conductivity, and mechanical properties (elasticity and weight/volume) guided by biological principles. We will apply this understanding for optimal design of materials and geometries to maximize interactions with the environment, such as light, heat, and nutrients. In turn, we will advance a catalog of technologies, including adaptive photonic films, coatings for water and heat management and transport, and energy harvesting/scavenging for human scale applications to be explored in Thrust 3, e.g. as textile cladding and responsive building skins. Key questions to be addressed in Thrust 2 are 1) How can we reproduce evolved structures/materials revealed in Thrust 1 using low cost and scalable additive and subtractive methods with given output properties having a required geometry? 2) How can we reverse engineer structures/materials for given output properties informed by nature, incorporating within the structure the required size, shape and geometry as embedded spatial information, allowing for both local and global re-structuring into thermodynamic preferred configurations once deployed? 3) How do we evaluate micro-/nanostructures against biological samples in a highly efficient fashion? 4) How do we integrate the micro-/nanostructures with macroscopic components in Thrust 3? 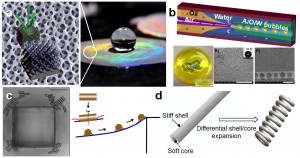 Roadmap to success: Tools. To achieve the goals of fabricating converged structures and ascertaining their functionalities, we will leverage our broad expertise in materials synthesis. Given the structural complexity shown in the biological examples, advanced fabrication techniques will be used in this thrust, including two-photon lithography (TPL), 3D holography lithography (HL), and 3D digital fabrication, as well as directed assembly using droplet microfluidics, capillary forces, and buckling instabilities in confined geometries, to create scaffolds to introduce additional optical and surface functionalities, to incorporate responsiveness and selectivity, and to direct instability and self-assembly processes (an additive process). The fabricated structures can also be used as sacrificial templates (a subtractive process) to create hollow core-shell structures, e.g. for light-weight materials and transportation networks. As seen in Fig. 1a, the Yang lab uses HL to fabricate 3D photonic crystals in photoresists at the (sub)micron scale, illustrating iridescent structural color as seen in the butterfly wings. Nanoroughness is introduced on a 3D template by manipulating photoresist solubility in developers, rendering the film dry and clean. By assembling microbubbles created from a microfluidic device, Lee obtains a highly buoyant yet mechanically robust, superhydrophobic film, which can carry a load more than 200 times their own weight (Fig. 1b). Using top-down lithography/soft lithography techniques, droplet microfluidics, and 3D printing techniques with novel photochemistry, together with synthesis and assembly in the nanoscale, we will design and fabricate 3D composite structures with embedded information (e.g. plasmonic nanoparticles and responsive chemical groups), which will respond to environmental and thermodynamic cues to steer water, heat and light. Though we will maintain expertise in cutting edge methodologies, in this Thrust, we focus our effort on identifying and shaping convergent structures to reveal their functions.

Mechanisms. Among other motifs, capillarity and elastic instabilities of proteins of different stiffnesses and water content play key roles in biology in the emergence of structures of given size, geometries, and shapes. We will create a collection of anisotropic structures with variable architectures, and use curved and textured surfaces to engineer the interfaces and films for directed assembly and actuation (Fig. 2c). Further, we will exploit buckling instabilities in microstructured polymer networks on a curved surface to create wrinkles and striations observed in plants and animals (Fig. 2d). We will characterize the mechanical and surface properties from evolved structures at micro- and nanoscales. Using numerical simulation, we plan to explore the interaction of electromagnetic waves with the structures we fabricate to guide the rational design of light harvesting photonic films.

The anisotropic structures of butterfly wing scales and pollen grains will be leveraged for their biologically evolved interplay of pattern geometry, anisotropy, instability, and dynamic tuning of wetting transitions to make water managing surfaces beyond superhydrophobicity, i.e. surfaces capable of guided water steering and shedding, selective wetting, and water harvesting on hybrid surfaces. We will also study the role of textures in impeding or facilitating the imbibition via capillarity or the advance of liquid under applied pressure drops, issues relevant to the tube-like structures of the insect trachea and the plant xylem. The advance of liquids within these surface-decorated tubes as a function of (negative) pressure and the role of surface topography in guiding this advance determine all manners of transport within the structures, key to their function and survival. Complimentary to elastic theory and finite-element simulation of the morphogenesis of plants, tissues and synthetic polymer gels on curved surfaces, a theoretical basis for efficiently evaluating and directing the dynamics of pattern formation has been developed. Throughout, theory and simulation will guide and be validated by experiments.

Fig. 2. (a) Creating a binary combinatorial library in photolithography by applying crosslinking gradient perpendicular to each other (Ober). (b) A library of wrinkling patterns from swelling of a hydrogel film of gradient crosslinking density along film depth (Yang).

Given the large set of multi-variable dependencies in our systems, we will design, establish, and improve combinatorial techniques to facilitate rapid evaluation of the evolved strategies identified in Thrust 1, and perform parallel synthesis and assembly to create a library of composition and processing parameters, and to predict materials physical properties and tunability (Fig. 2). A major goal of this thrust is to develop scalable manufacturing processes and bridge between micro-/nanostructures and macroscale applications. High throughput and low-cost techniques such as a roll-to-roll process will be modified and integrated with our 3D fabrication methods to create hierarchical structures over large areas in a continuous fashion. Architects in our center are establishing computational models and 3D digital fabrication methods that radically transform multi-optimization strategies in built environments by exploring new responsive designs and scalability models in simulation and in fabricated form. Together, extracting scalability principles from nature, we will program the material behaviour of synthetic matter and integrate them with live matter for multifunctional responsiveness of enclosures and infrastructures through combinatorial models for integrative light, hygrothermal, and structural optimization.