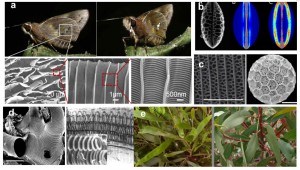 (a) A white patch on Carystoides escalanteiDHJ02 wings at a perpendicular angle (left) and a low angle (right) (Janzen & Hallwachs) and the corresponding SEM images of the micro-nanostructures on the wing scale (Yang). (b) Thin shell simulation of a deformed lily pollen grain and calculation of stretching and bending energy densities (Katifori). (c) Comparison of textures of butterfly wing scale and pollen grain. (d) Left to Right: the tracheal system of the beetle Zophobas rugipes (scale bar: 200μm) (Credit, Thorsten Burmester, Nature, 2005, 433, 471-472), xylem vessels of Plantago major. (Credit, Jeje, A. A. and Zimmerman, M. H., J. Experimental Botany, 1979, 30 (117), 817-827) Inset: internal spiral structure, about 20μm in diameter, similar to the rings in a vacuum cleaner hose, known to resist its collapse and strengthen the structure. (e) Leaves of acacia and eucalyptus trees (Poethig).

Overview. Survival requires biological systems to optimize water, heat, and light management in their local habitat, but with respect to wildly different budgets and physical challenges. We will study convergent structures to ascertain their means of controlling and managing their habitat to prospect for new means of economically managing our own. We will develop synthetic rules based on these studies to produce new functional synthetic structures for the human habitat to be further developed in Thrust 2 and produced on the large scale in Thrust 3. Key questions to be addressed in Thrust 1 are 1) What are the essential features, functions, and mechanisms in the convergent biological examples for growth, adaptation, structural color, light/heat harvesting, adhesion, anti-fouling, durability, light-weighting, and strength? 2) Do they feature conserved hierarchical arrangements to provide these attributes? 3) Are they optimized? To ascertain the biological costs and optimality of these converged solutions and the mutation of the species in response to scant resources and environmental cues, we will study the taxa of species exhibiting these converged solutions, focusing on butterfly and moth polyphenism, the development of bilateral petioles, and vascular systems in plants and animals. We focus our initial efforts on four convergent structures. I. Structural ornamentation on butterfly wings Harnessing structural whiteness is technologically important in systems ranging from power efficient computer displays, to sensors, to energy efficient buildings, windows, and vehicles. While some butterflies are known for their iridescent structural colors, much more omnipresent is that many butterfly and moth wings have white spots, stripes and patches even though they are separated by millions of years of evolution. Some spots appear as brilliantly white only when light reflects at well-defined angles from chitin structures on the wing scales; else they appear dull, gray and irregular (Fig. 1a). Butterflies and moths at rest hide this ornamentation by the position of their wings. When in flight, however, as the wings pass through the reflecting angles, the spots appear to flash. The observer in dim light sees a complex blur and on-off-on flashing of the white features which ceases abruptly when the insect folds its wings. This feature is hypothesized to be important in both predator avoidance and in courtship strategies. In many species, genetically similar individuals can develop into one of several distinct morphs with dramatic variations in wing patterns in response to environmental cues, so called polyphenism. We will mine heretofore undeveloped examples and observations from nature, and identify the key optical features that have convergently evolved over and over again in unrelated insect species and give them distinct adaption advantages. II. Butterfly wings and pollen grains These same structures on butterfly scales may also offer directional water and pheromone wicking and even aerodynamic control. Remarkably, analogous structures occur on the seemingly unrelated wall of pollen grains (Fig. 1b and c) that must protect their contents from desiccation and drowning while also being able to be blown through the air or carried on animals. This feat requires a fine-tuning of strength, moisture management, stickiness, and weight. The grain surface, decorated with an array of micromorphologies including spikes, striations, and reticulate meshes, is remarkably similar to the surface of a butterfly wing scale, with its own associated requirements for strength, anti-fouling, weight, and moisture/heat/light management. These structures may arise from similar mechanisms, quite possibly owing to the differential stress induced by swelling/shrinkage of proteins of differing stiffness in a confined geometry. We will study the mechanisms that govern the occurrence of these structures and identify their role in directional wicking, and study their anti-fouling properties. We will also study the optical behavior of core-shell-reticulated or striated structures inspired by the pollen surfaces for advanced optics. III. Vascular structures in plants and animals Our third class of convergent structures is the reticulate, ring, or spiral striations in both the plant xylem vasculature, and in the microstructures on the walls of an insect’s trachea (Fig. 1d). In plants, these features are correlated with hydraulic conductivity or resistance to cavitation; however, detailed understanding of the role of these structures and the tradeoffs between the investment in plant material and improved function are lacking. In the insect, the trachea conducts the diffusion and exchange of gases, and is also believed to play a role in thermal regulation and water management. These structures will be studied in terms of mechanisms governing their emergence and their biological role, for contact line pinning/jumping and implications for water flux, management of embolism formation and associated cavitation fatigue in the plant’s water conducting system and hydraulic adaptation of root systems, and water transpiration, respiration, and thermal management. IV. Weather coping leaves Our fourth convergent solution has emerged in the genetically and evolutionarily distant Acacia and Eucalyptus trees, Fabaceae and Myrtaceae, respectively. Both grow in the hot, dry regions of Australia, and have independently developed the same coping mechanism. Their “leaves” are not leaves at all but have evolved from a part of the stem, the petiole. Unlike the leaves on familiar trees, they photosynthesize on both sides, and hang vertically as opposed to horizontally. This adaptation presumably arose to prevent water loss – and the highly unusual two-sided photosynthesis allows the capture of the early and late sun. Our biologists will work with theoretical physicists and mechanical engineers to investigate the formation of this “bilateral” structure as compared to the common leaf. Each of these convergent structures will be mined for functional structures for the human habitat in Thrusts 2 and 3. In addition to the obvious “Goldilocks” opportunities for structures that are just right for exploitation in the human habitat, we will capitalize on our mechanistic understanding and revisit extensive phylogenetic fossil records, databases of leaf venations, and butterfly records to comb for new convergent solutions