Scaling up for materials packaging and assembly at the system level

Overview. Fundamental science and the promise of new technologies is, of course, an admirable endpoint. However, this Center will go to the next step by interacting with designers, architects, and energy policy experts to implement these functional structures at the human scale. As Aesop’s crow was able to drink from the deep pitcher by adding small pebbles until the water level rose, this Thrust will hold to the adage, “little by little does the trick.” We have both the expertise and appreciation to understand that small savings in resource utilization can, if implemented on a sweeping scale, lead to significant overall efficiencies, as for example has been realized by the mandated adoption of LED light bulbs. In concert with the Kleinman Center for Energy Policy, we will focus on applications that can be scaled up to provide real change to impact human habitat.

To do so, we go beyond biology to exploit principles of scaling and design in the built environment. In parallel with the discovery modes in Thrusts 1 and 2, this Thrust will pursue design desiderata from the perspective of scalability, reconfigurability, and pure geometry. To connect between the biological structures in Thrust 1, the experimental protomaterials in Thrust 2, and large-scale design in this Thrust, we will exploit key questions related to the scale-invariance of topology and geometry. 1) How is geometry scale invariant? After all, the term geometry literally means, “measuring the Earth.” But as we have learned from our study of fluids, friction, and viscoelasticity, scaling arguments reduce many problems to dimensionless parameters. Pure geometry scales the same way – doubling the lengths, quadruples the areas and octuples the volumes but all the connections, congruences, and similarities remain the same. Implementing scale changes will allow us to move from nanorobotics, to self-assembling machines, to human-scale structures for protection, warmth, and natural resource conservation. However, to do so, we must address questions like: 2) How do we control compliance, foldability (space saving and dramatic shape/volume change) with minimal waste and efficient load distribution since materials properties could change dramatically depending on scale? 3) Are the strategies we develop also cost-effective? 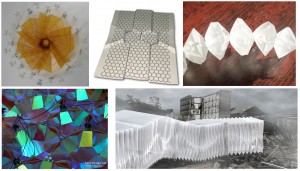 The challenge with scaling up the structures is well known: masses scale cubically, lengths linearly, and bending moduli quadratically so torque balance between gravitational forces and intrinsic strength will fail. However, an essential aspect of the origami and kirigami structures shown in Fig. 1 is that the material strength will not come from bending rigidity but by shear moduli directly. Meanwhile, extremely high strength-to-weight ratios can be obtained by the rational design of material’s internal cellular structures. A new set of structural scaling laws to supplement and supplant the standard set of rules will be developed, blending mechanics, engineering, physics, and mathematics to achieve higher performance (e.g. lower weight, higher precision, high strength) and lower cost (e.g. fewer parts, reduced assembly). Our team already has implementation experience through the architectural design groups. We will further develop robotic, modular assembly algorithms for on-demand packaging and (re)programming of the components of functional materials over large areas with high efficiency. Using their highly developed design tools along with the materials simulation, we will move from the highly evolved and optimized materials of nature to green strategies that are cost-effective, reusable, and programmable.

Technology endpoints. A major output of this center will be the development and scale up of new hierarchical structures, functions, mechanisms, and methodologies at low cost for coping with the human habitat. In 5 years, the center will focus on 1) structural color and whiteness, which are technologically important in electronic displays, sensors, energy efficient buildings, windows, and vehicles, 2) self-cleaning, anti-fouling, water managing structures that are also light-weight for minimal energy consumption and disaster relief (e.g. storm waters and extreme dryness), 3) membranes based on plant vasculatures or the double-sided leaf structures for more efficient energy harvesting, resource transportation, and thermal management. Furthermore, in the first 5 years, we will build foundations to address questions in our 10-year plan, which include 1) What molecules, genes, and networks are responsible for the development of color patterning? 2) Can we map the genetic trees of the proteins and investigate their evolutionary strategies for assemblies to create living photonics? and 3) Can we alter the morphologies and thus functions (e.g. efficient adhesion or antifouling) via physicochemical processes? We will extend our studies in structural convergence to macroevolution from the fossil record, which registers a wealth of optimized morphological strategies, many of which evolved to address issues affecting human-made materials, such as locomotion, defense, and durability.